You won’t find many lists of Liverpool’s worst-ever signings without a special mention for El-Hadji Diouf.

The winger was one of the standout performers at the 2002 World Cup finals while playing for Senegal, who stunned champions France in the tournament’s opening game before reaching the quarter-finals.

El-Hadji Diouf was playing for French side Lens at the time but earned a move to English giants Liverpool off the back of the tournament in South Korea and Japan. The fee was reportedly around £12 million, which wasn’t cheap 20 years ago.

However, the Senegal international was a bitter disappointment at Anfield, scoring just six goals in 79 appearances for the Merseyside outfit. In order to make it at Liverpool in the mid-2000s, you didn’t only have to impress the manager – you also needed to impress talismanic captain Steven Gerrard and influential defender Jamie Carragher.

Diouf, however, made a bad impression on both Liverpool legends during his ill-fated spell with the Reds. In his 2015 autobiography, Gerrard said of his former teammate: “It seemed to me, Diouf did not care about football and about Liverpool.”  But on the day that Gerrard announced his retirement from football in November 2016, Diouf issued a scathing assessment of the Anfield icon live on French TV.

Speaking about Gerrard and Carragher, Diouf said on SFR Sport: “People told me at Liverpool, there were some guys you could not touch, but I touched them. That is why it was complicated for me.” 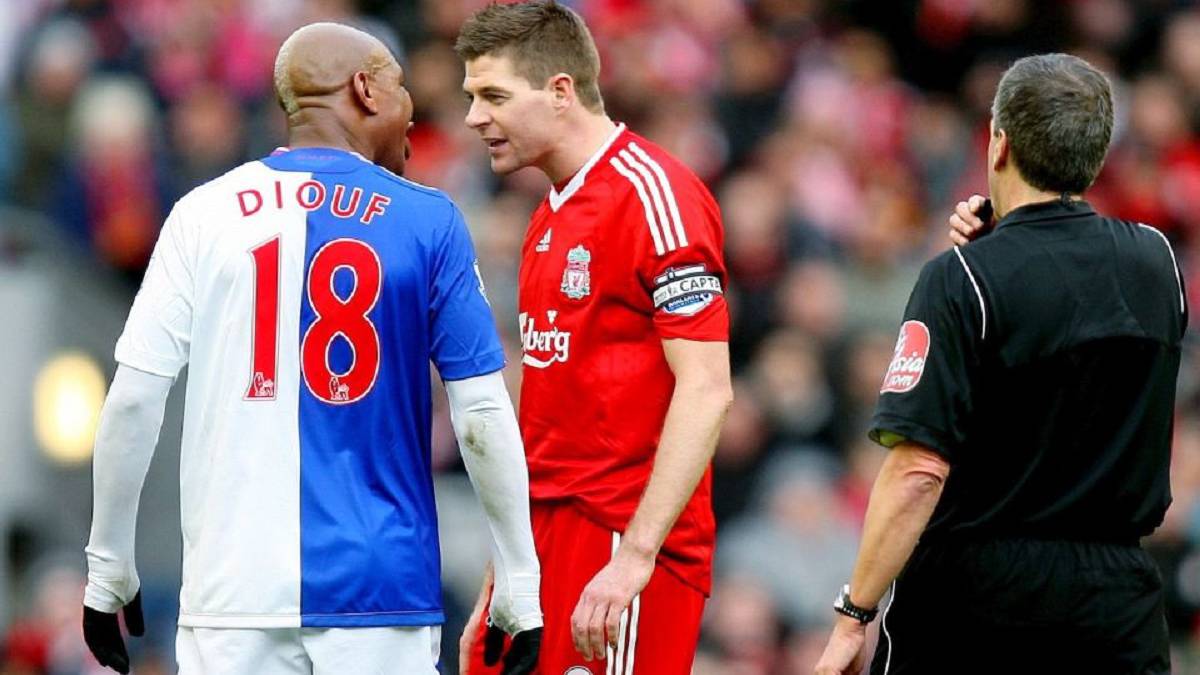 Diouf was sat next to former Arsenal and Chelsea midfielder Emmanuel Petit, who attempted to defend Gerrard by referencing the famous 2005 Champions League final. But after Petit failed to remember whether the year of that extraordinary final against AC Milan in Istanbul was 2005 or 2006, Diouf saw this as an opportunity to take a further dig at Gerrard.

“Here is the proof, even you cannot remember,” he said. “You are talking about Euros and World Cup. Today I owe you respect [Petit], I owe respect to Mr [Zinedine] Zidane because you did win the World Cup.”

Petit again interrupted, adding: “I cannot let you say that about Steven Gerrard, he was an immense player.”

Diouf responded: “I repeat. I respect the player, very big player, but the man, I do not respect. And I told him, I let him know that.

“Then as you know, there were some brown-nosers, who went to the manager to repeat what I said. That was the real problem. When Gerrard did that, we had an argument, like real men.

“That is why he does not like me. He knows I say what I think, that when it is not right, no problem, I am up for it. He could not, he was afraid of looking into my eyes. He was afraid of talking to me. Let’s not forget when I arrived I did not ask for his shirt. He asked for my Senegal shirt for one of his mates.”

El-Hadji Diouf , who now reportedly works as a goodwill ambassador for the Senegalese government, has also had various digs at Carragher in recent years.

In 2019, for example, he said on beIN Sports: “[Carragher] was a right-footed player with two left feet. If he wasn’t a Scouser, a son of Liverpool, he would never have had the career he did.”

They say you’ll never walk alone after playing for Liverpool, but it’s hard to envisage the former Premier League bad boy ever being invited back to Anfield with open arms.