Having both enjoyed 2-0 successes on the opening weekend of the Premier League season, champions Manchester City and newly-promoted Bournemouth prepare for battle at the Etihad Stadium on Saturday afternoon.

The Citizens got the better of West Ham United at the London Stadium last time out, while the Cherries ran out convincing winners over Aston Villa.

Perhaps drawing more attention to his comical post-match interview in which he struggled to hold back the expletives, Erling Braut Haaland’s Premier League debut for Man City was all that Pep Guardiola wanted and more. The prolific Norwegian won and converted a penalty in the 36th minute of the contest before latching onto a perfectly-weighted pass from Kevin De Bruyne in the second half, and he did the rest to kick off life back in England with a brace.

Haaland staked an early claim for the Golden Boot with his efforts at the London Stadium as City began the defence of their top-flight title in perfect fashion, and the opening home games of Premier League seasons are generally kind to Guardiola’s side. 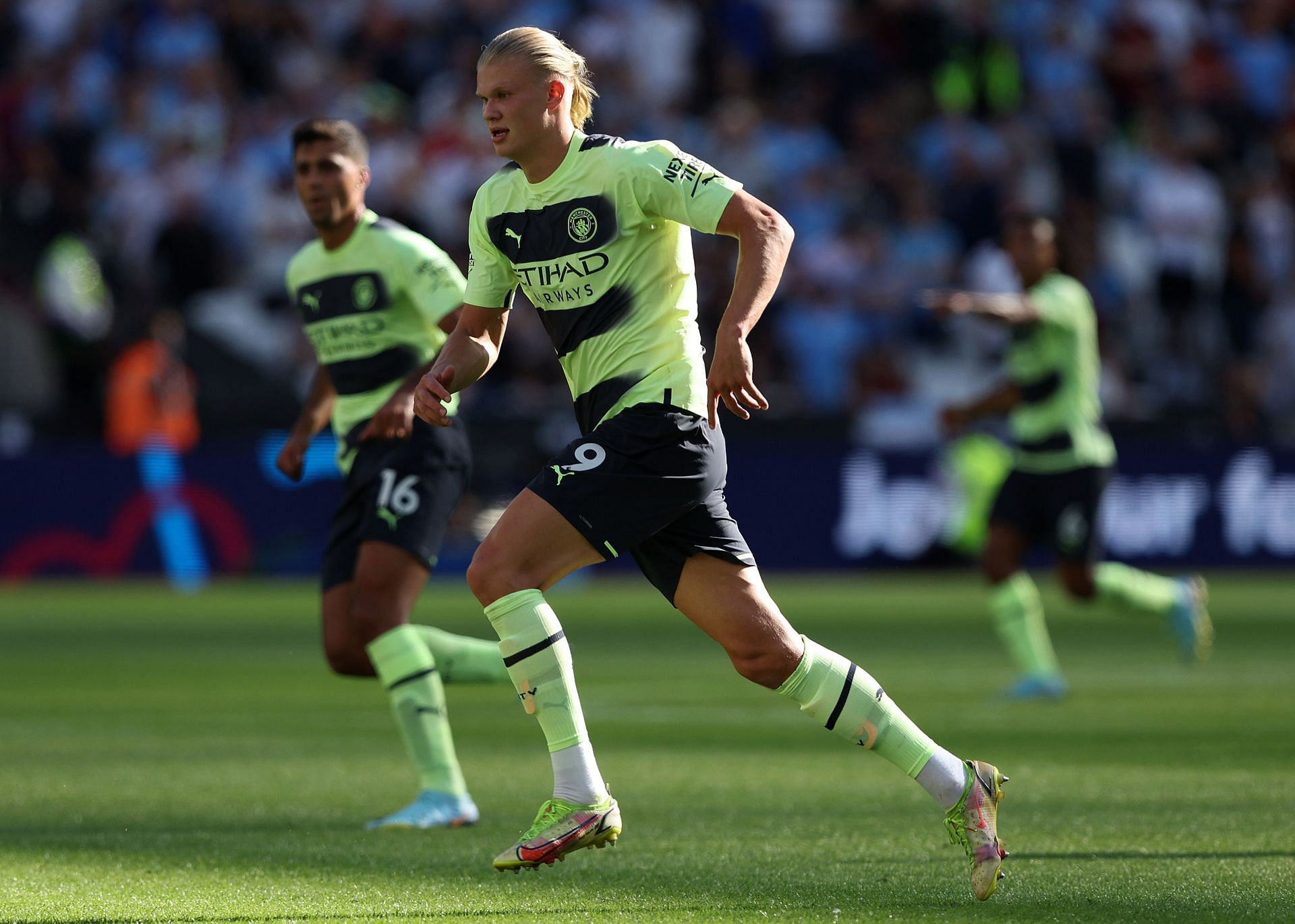 Of course, Leicester City ran out 5-2 winners in City’s first Etihad fixture of 2020-21, but that represents the Citizens’ only defeat from 22 such fixtures at the start of the season, and their recent home exploits certainly make for pleasant reading.  Indeed, the reigning champions have won each of their last four Premier League games at the Etihad and have racked up at least two goals in each of their last eight, which spells optimism for Haaland and danger for Bournemouth.

Saturday’s contest at the Vitality Stadium pitted a rather frugal Bournemouth against big-spending Aston Villa, but the two teams’ respective signings list counted for nought as Scott Parker’s side put another blot on Steven Gerrard’s managerial notebook. Jefferson Lerma struck within just two minutes for the quickest goal ever scored by a newly-promoted side on the first weekend of the season, and in the second half, Kieffer Moore headed home past Emiliano Martinez at a bouncing South Coast stadium. 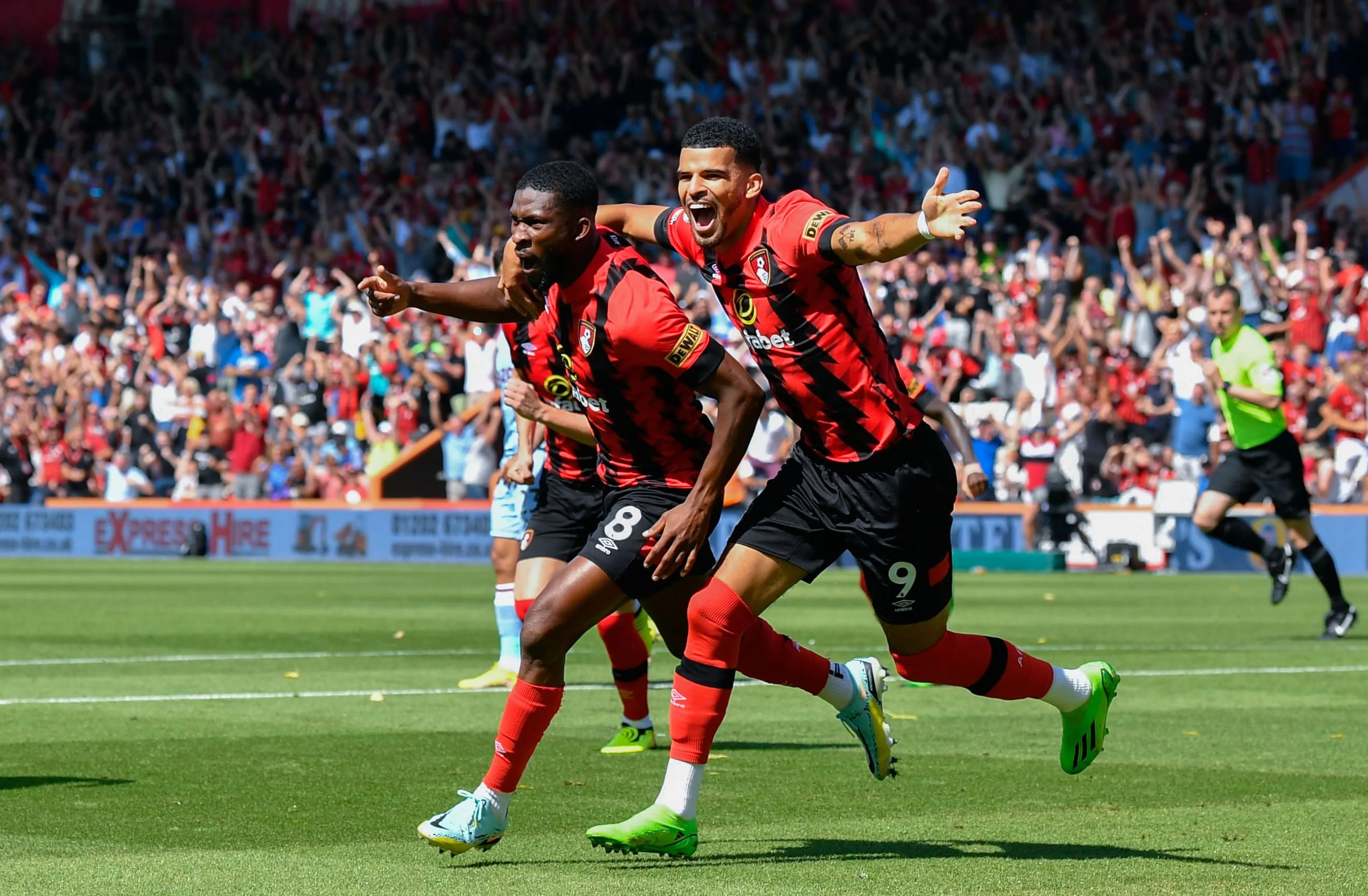 Maintaining that momentum at home against the champions will be a tall order indeed for the Cherries, who have since reinforced their defence with the eye-catching signings of Neto and Marcos Senesi from Barcelona and Feyenoord respectively.

Bournemouth did end the 2021-22 Championship season unbeaten in four away games – keeping clean sheets in three of them – but Parker is still awaiting his first scalp against City as a manager after four successive defeats while in charge of Fulham.

Furthermore, Man City head into game week two aiming to claim the 11th win from 11 Premier League clashes with Bournemouth, which represents the best such 100% winning streak for a club against a single Premier League opponent in the tournament’s history.

Man City should go into Saturday’s game with Aymeric Laporte as their only absentee as he recovers from knee surgery, and Guardiola did not pick up any fresh concerns at the London Stadium.

Bernardo Silva was notably left out of the starting lineup amid continued links with a switch to Barcelona, and it will be interesting to see whether he starts here after refusing to close the door on a summer exit from the Etihad. Riyad Mahrez is also battling to regain his spot on the right-hand side back from Phil Foden, while Sergio Gomez’s arrival from Anderlecht could be confirmed before the weekend, but he is unlikely to be involved just yet.

As for Bournemouth, Parker is hopeful of welcoming Ryan Fredericks into the fold for the weekend as he recovers from a calf injury, but Joe Rothwell’s thigh problem will take a little bit longer to calm down.

David Brooks also remains on the comeback trail after his stage 2 Hodgkin lymphoma diagnosis last year and subsequent recovery, and Parker must decide whether to throw Neto and Senesi straight into the action in the most difficult domestic fixture of them all.

Parker may want to ease the duo into Premier League football from the substitutes bench, which would therefore see Mark Travers start in goal at the Etihad.

Erling Haaland and co. will be looking to put on a show in their first home league game of the season. Bournemouth have a poor record against Manchester City in the Premier League. Despite getting off to a winning start against Aston Villa, they will struggle to take the game to Manchester City.