When you think of the biggest rivalries in English football, none stands taller and bigger than the North West Derby – Liverpool vs Manchester United.

38 league titles and nine European Cups are shared between the two most decorated clubs in England, and this fixture remains one of the most anticipated league games across the world.

Commercially, no club football fixture is bigger than this one – this match attracts hundreds of millions of viewers across the globe, far more than any other league game. The rivalry has been fuelled by the proximity of the two major cities that they represent, their historic economic and industrial rivalry, significant periods of domestic footballing dominance and European success, and their popularity and fan support both home and abroad.

While Bob Paisley and Bill Shankly made Liverpool the strongest club in Europe, Sir Alex Ferguson took that status to Manchester United in a 20 year period where the Reds declined.

From the legendary Alen Hansen going up against the silky smooth George Best to Jamie Carragher and Gary Neville laying it all out on the football field, Liverpool vs Manchester United is a rivalry etched in the history books of football.

In this list, we take a look at what an all-time combined XI of players from these two clubs would look like. Be ready to see some legends of the game in this list.

Note – A player’s peak at one of these clubs plus his longevity at the said club is considered for him to make this list. As such, the likes of Cristiano Ronaldo, Luis Suarez, and Virgil Van Dijk miss out. 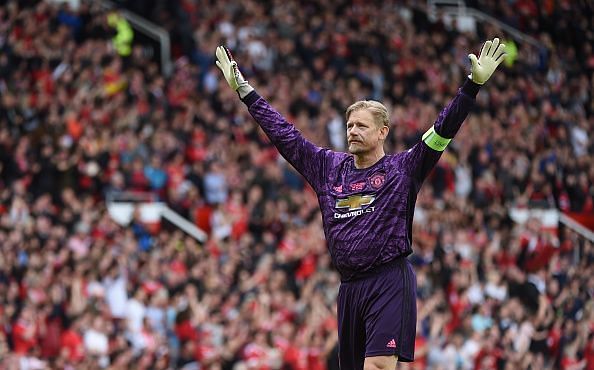 There have been a lot of great goalkeepers who have played their part in this rivalry and their club’s history – David De Gea, Bruce Grobbelaar, Edwin Van Der Sar to name a few. However, Peter Schmeichel stands out above the rest due to his consistency and longevity at the peak of Manchester United’s domination of England and Europe.

The Danish international was the first-choice goalkeeper for the Red Devils for 8 years, making his debut in 1999 and staying on till 1999 – the year in which his club created history by becoming the first English team to complete the treble. Schmeichel’s performances for his club were immense and as good as David De Gea has been, his trophy resume does not even come close to the one which the former goalkeeper boasts of. 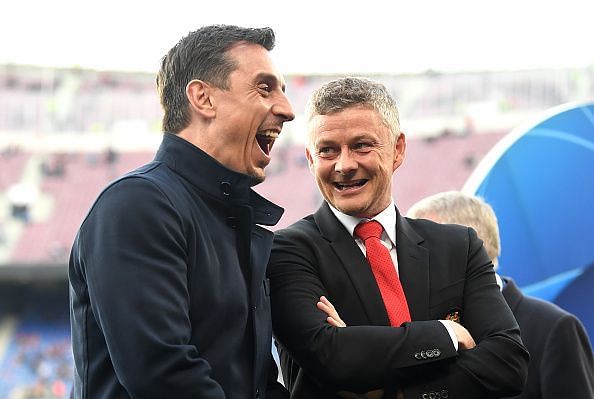 A one-club man, Gary Neville is a former Manchester United captain who has won every single trophy with the Red Devils in his long career. One of the best full-backs of the modern game, Neville was an aggressive and tenacious player who could read the game very well and had a keen sense of tackling and positioning.

Not traditionally the fastest or the strongest player, it was Neville’s intelligence and leadership skills at the back which helped him excel at his role. He was one of the best defenders in the world at his peak and the former England international even had a couple of offensive tricks in his arsenal, which could be seen by his overlapping runs and passes into the box.

Having won eight league titles and two European Cups with the Red Devils, Neville remains as one of the smartest and most loved players to have played at Old Trafford. There has been no better right-back at either Liverpool or Manchester United in history, and as such, Neville’s place here is well deserved.

Sir Alex Ferguson signed Rio Ferdinand from Leeds United for a whopping £30M in 2002, which was an exorbitant amount for a defender at the time. Almost two decades down the line, everyone agrees that the price was worth it as Rio established himself as the greatest defender in the history of the club.

Having won 6 Premier League titles and one Champions League trophy, the former Leeds United player was named into the Premier League Team of the Year six times. A maestro on the ball with his amazing distribution skills, Ferdinand was a technically gifted centre-back whose pace and tackling prowess were probably second to none at his peak, and he slides into this team with relative ease as perhaps the best centre-back to have taken part in this historic fixture. 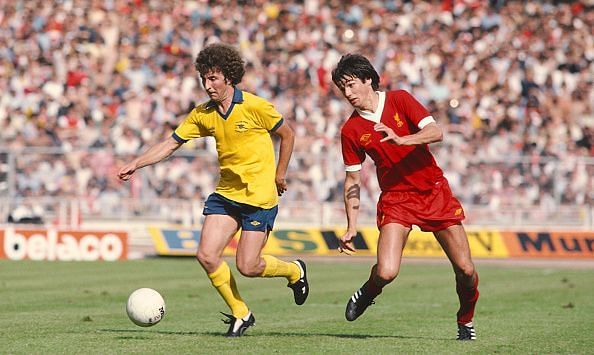 Signed by the legendary Liverpool manager Bob Paisley in 1977, Hansen went on to become the greatest Liverpool defender ever as he leads that historic team to unprecedented domestic and European success.

A great reader of the game who could tackle the ball as well as he could pass it out from the back, Hansen was the leader of a defence which won three European titles in four years. The former Scottish international represented the Reds for over 13 years, and he won everything there is to win for his team during that time. Barring Graeme Souness and Kenny Dalglish, no Paisley signing had more impact on the club’s fortune than Hansen.

One of the surviving members of the Munich Air Disaster which shocked the footballing community and broke Manchester United, Bill Foulkes remains one of the most historic figures in the club’s history. Having made 566 appearances for the Red Devils, only three players have represented the club more times than Foulkes.

Not only is the former England international one of the greatest defenders of his era, but he was one of the strong figures who helped the club recover and come back from the disaster which had affected his team. He was an integral part of the Manchester United team who became the first English club to win the European Cup, and he also won four League titles with the club.

Although Foulkes played the latter half of his career as a centre-back, the strong and pacy defender started off his career as a full-back and performed well at the role for his team. A truly versatile presence at the back who was a manager’s dream, Foulkes’ place here is well-deserved.

This one was a tough call between Graeme Souness and Paul Scholes, but the latter’s consistent performances and his contributions for that Manchester United team which rewrote English records earn him a spot here. Considered by many to be one of the greatest passers of the ball ever, Scholes was a gifted genius who could control the tempo of the game through just a few touches of the ball.

One of the members of the famous class of ’92, the former English international is one of the most decorated players in English football history. He has won the Premier League 11 times, and he spent his entire career at Old Trafford, making over 700 appearances for the club. As far as central midfielders go, there are few better than Scholes, and his place here is cemented.

Liverpool vs Manchester United just does not feel the same without Steven Gerrard. A boyhood Liverpool fan, perhaps there is no one in the history of mankind to whom this fixture meant more than it did to the Liverpool captain, who always showed up in this particular contest.

No player has scored more goals in this fixture than Gerrard (9). The famous camera kiss at Old Trafford, the infamous red card in his last appearance against his sworn rivals – there is nothing that Stevie G has not done against the Red Devils. Hated by Manchester United fans as much as he was loved by the Liverpool fans, there is no single individual who symbolised more what this fixture stood for.

Despite the absence of a league title (an argument to this day used by United fans to mock Liverpool’s former captain), Gerrard is one of the best and most complete midfielders to ever play the game, and he is considered by many to be the greatest Liverpool player ever.

Barring Sir Alex Ferguson, no personality has more impact on the history of Manchester United than Sir Bobby Charlton. A survivor of the Munich Air Disaster, Charlton is the individual who helped the Red Devils recover from the life-changing incident and established them as the best club in England yet again.

A World Cup winner, only Ryan Giggs has made more appearances for the Old Trafford team than the former England captain. The great attacking midfielder is considered by many to be one of the greatest players to ever kick the ball, and he was awarded the Ballon d’Or in 1966 for his performances with England and Manchester United.

The great personality can still be seen at Old Trafford on matchdays, and he has a statue of himself standing right outside the great stadium. His inclusion in this list is a no-brainer.

Liverpool Football Club as we know it today would not have existed without the contributions of these three individuals – Bill Shankly, Bob Paisley, and Kenny Dalglish. Before Steven Gerrard, “King” Kenny was considered to be the best player to ever wear a red jersey; some people would say he still ranks over Gerrard on this list. No matter where you stand on this topic, it is indisputable that the former Scottish international is one of the greatest players to play in England’s top division.

The Reds’ dominance of England and Europe was all kickstarted when Paisley signed Dalglish in 1977. Over the next 13 years, the forward would establish himself as one of the greatest players ever, winning six league titles and three European Cups. Dalglish was a big-game player whose mere presence on the pitch elevated his team, and the former Celtic player was knighted in 2018 for his services to football. No Liverpool list is complete without the King, and he walks into this team with ease.

The modern-day face of Manchester United, no player has scored more goals for the Red Devils than Wayne Rooney (253). Not only is Rooney one of the best players of this generation, but his storied career at Old Trafford has also made him one of the greatest players in the history of English football.

At his peak, there was perhaps no player as explosive and as complete as the former England captain. A prolific goalscorer, perhaps Rooney’s most valuable trait was his ability to adjust and sacrifice for his team. Throughout his career, the forward has been deployed as an attacking midfielder, a winger, a false 9, a centre-forward, etc. Whatever role the manager needed Rooney to perform, he did it – and he did it with ease.

In the 21st century, no player has been more synonymous with the Red Devils as Rooney, and he is one of the main reasons why the club has such a huge fanbase across the world. As such, it is impossible to exclude “Wazza” from this list.

One of the most prolific goalscorers ever, no player has scored more goals for Liverpool than Ian Rush. A complete striker who could finish with both feet and had an arsenal of attacking moves in his bag, the former Welsh international scored 346 goals for the Reds in all competitions in just over 650 appearances.

Having two different playing spells at Anfield, the Dalglish-Rush partnership was the best strike force in football for around a decade, and the striker is considered to be one of the top 3 players in the history of the club. He was voted into the PFA Team of the Century in 2007 and has won first Five Division titles and 2 European Cups with Liverpool. Due to his goalscoring prowess which is unmatched by any other player on this list, Rush completes our all-time combined XI of Liverpool and Manchester United players.

Liverpool vs Manchester United: 5 key battles to watch out for