Liverpool beat Leicester City 5-4 on penalties to advance into the semifinals of the 2021/22 EFL Cup. Diogo Jota scored the winning penalty after the sides played out a pulsating 3-3 draw in normal time. Two goals from Jamie Vardy had the Foxes leading comfortably after only 13 minutes before Alex Oxlade-Chamberlain pulled one back for the hosts.

James Maddison then restored Leicester’s two-goal cushion just after the half-hour mark. Diogo Jota and Takumi Minamino scored one each in the second period for Liverpool, with the latter’s strike coming in the fifth minute of stoppage-time.

In the shootout, Caoimhim Kelleher made two saves which allowed Jota to win it for the Reds on their sixth spot-kick, eclipsing Minamino’s earlier miss.

Liverpool have drawn Arsenal in the last four of the Carabao Cup.

Here are the player ratings:

Made a brilliant save from Thomas in the shootout and also saved well from Bertrand, playing a vital role as Liverpool progressed.

In the game itself, he made a good save from Daka early on and got a hand to Vardy’s shot for the opener but not enough. Maybe could have used his feet but that goal wasn’t on him at all. Nice collection from Daka’s deflected effort and a strong save from Vardy even though the striker fouled Morton. 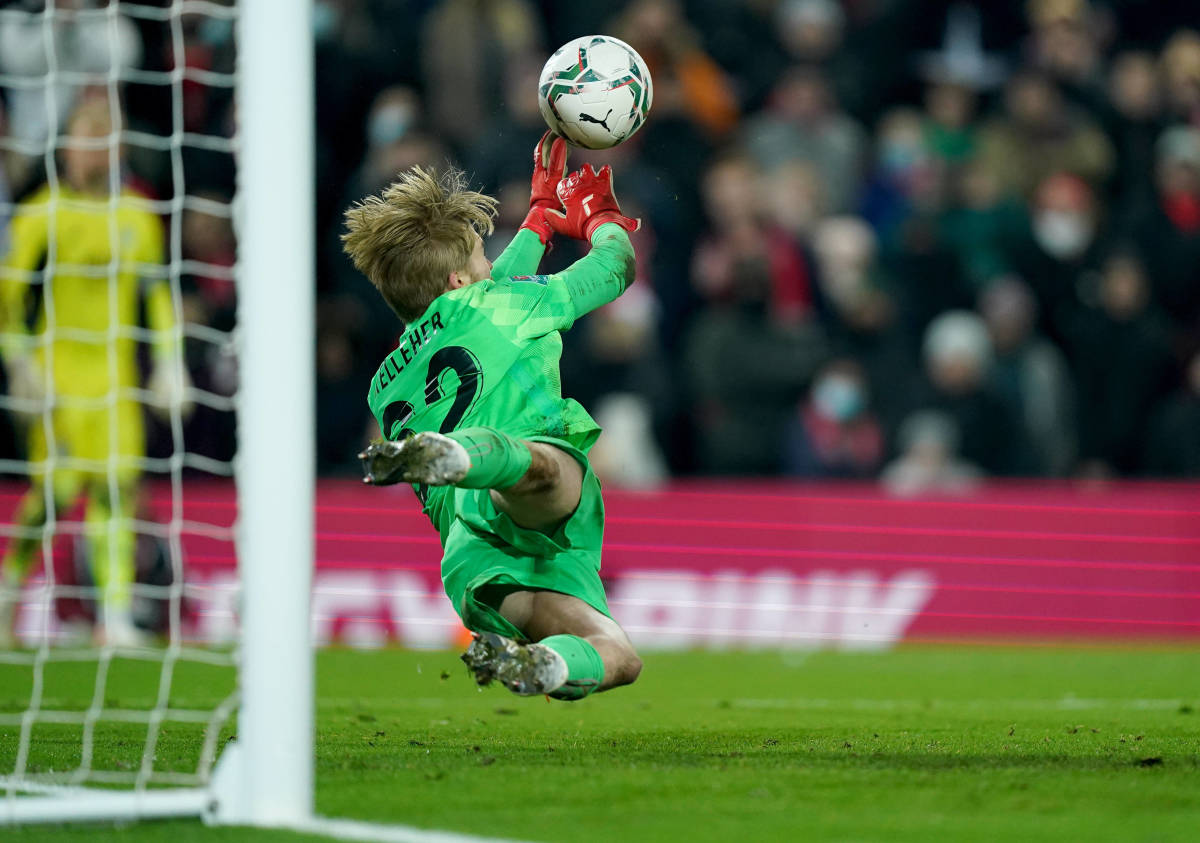 Questions will be asked after he was beaten down the middle from distance by Maddison, but it was one of those hit with power and loop we’ve seen many ‘keepers fail to deal with in the past. Also made a good save from Dewsbury-Hall on what was a busy night for the Irishman during which he looked comfortable sweeping up.

Rounded it off with those penalty saves in front of the away fans, and didn’t even need any of the gamesmanship shown by his opposite number, Kasper Schmeichel.

Had a shot towards the end of the first half, cutting inside onto his left but the strike was fairly easy for Schmeichel in the end. It was an encouraging sign, but he was unable to build on it as he was subbed at half-time.

Gave the ball away leading directly to a Vardy chance but the striker’s shot hit the post and Gomez was able to clear up. Doesn’t yet appear assertive enough to lead a defence in the absence of other senior players.

Let Vardy get in behind him for the opener.

Displays some really good and varied passing – long switches and low passes into the feet of forwards – but can be complacent on the ball.

Was caught out in the first half leading to a Vardy chance that was eventually sorted by Morton.

He and Gomez didn’t work as a pairing at all, but that wasn’t all the Frenchman’s fault.

Some nice work in the buildup to Oxlade-Chamberlain goal and was always on hand to send in a cross. Couldn’t get back to Vardy for Leicester‘s second. Some sloppy buildup play didn’t help the general feeling of security down the left-hand side of defence, and didn’t help the teenage center-back alongside him.

Was on hand to deliver some good crosses as usual, and tidied his game up as it went on, as many did. Gets extra marks for having a go at the linesman when subbed off with 10 to go.

Picked up another early booking as was the case against Newcastle, which isn’t ideal in his position against quick forwards and clever midfielders. Covered very well to thwart Vardy after Koumetio’s error, winning a foul.

Subbed off in the second half having had little impact on the game. A decent runout having been under the weather recently, which probably played a part in his average display.

Alex Oxlade-Chamberlain – 8 (Man of the Match)

Was the senior player who tried to drive this young team forward the most. Often this worked, sometimes it didn’t, but the intent was important. Finished his goal nicely but sent a couple of other shots off target later on.

Was somehow still running with the same intensity in added time. Another impressive shift from the revived English midfielder.

Played well on the right in a late cameo against Preston, but didn’t look quite as useful in the position tonight.

Looked better later on when dropping to a full-back role, though he didn’t seem any less attacking. 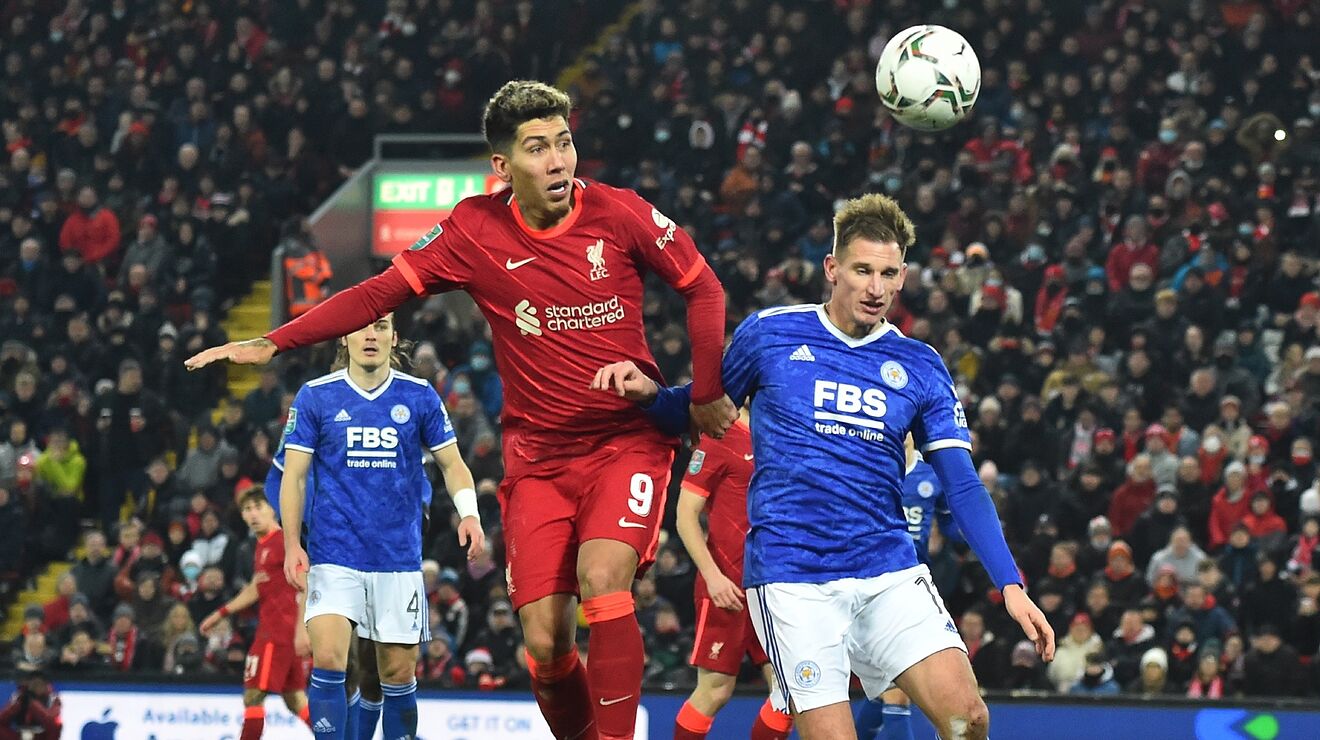 Some nice moments to entertain the crowd and make things stick upfront. Was composed when called up to set up Oxlade-Chamberlain.

A brilliant take and finish to level the scores in injury time in front of the Kop. Had an early shot wide and blazed over from Firmno’s pass later in the first half. 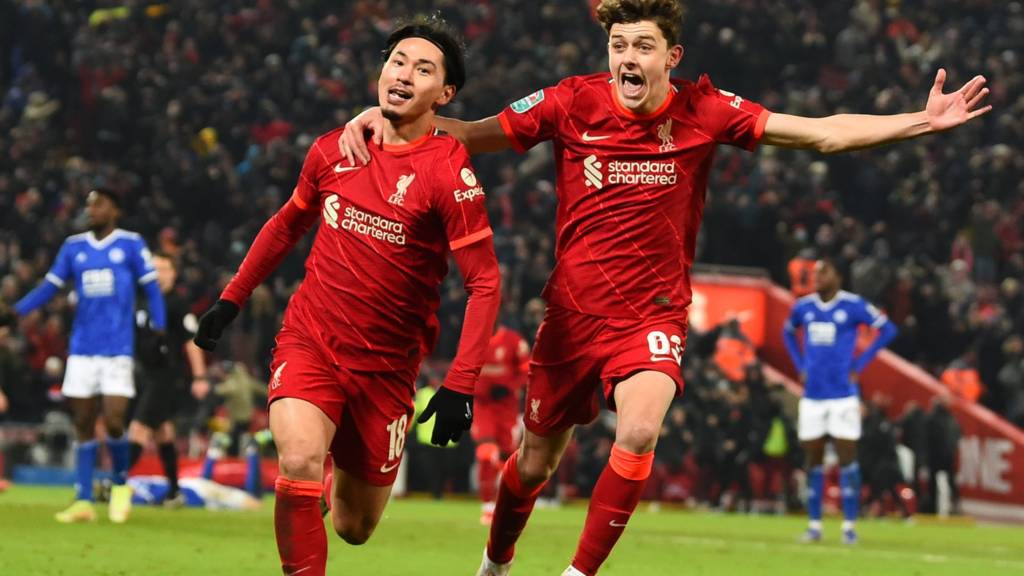 Improved in the second half once more senior players were on the pitch alongside him, playing a nice ball to set up Firmino, but the Brazilian’s shot was blocked. Got his assist in the end after a really neat touch through to Jota, and got his goal in dramatic fashion.

Hit the bar with his penalty but it didn’t matter.

Nice ball in to assist the equaliser and offered good support for the players around him in the second half.

In the main, he offered composure where Koumetio couldn’t and settled the rest of the team as a result.

There was one shaky moment but his mere presence was too much for Vardy. Maybe he can give Koumetio some pointers.

A glanced a header across goal showed his intent, and he was on hand to slot home Minamino’s pass.

Headed Keita’s shot straight at Schmeichel – anywhere else it would have been a goal at that pace.

Netted the winning penalty with calmness and conviction.