In both the build-up and aftermath of Manchester City‘s pulsating 2-2 draw with Liverpool at Etihad Stadium last weekend, plenty of discussions centred upon how their rivalry sits alongside the other great jousts of the Premier League era.

There was no common ground in terms of verbal spats between managers, nor were there hands, heads, and any other conveniently-placed objects being thrown in the tunnel. You need Atletico Madrid involved for that kind of caper nowadays. If the longing for this generation’s “Pizzagate” told us anything, it is that we like things that are familiar – sights and sounds that make sense in a historical context.

To that extent, Kevin De Bruyne marauding about the field, scoring goals, and creating glorious chances is something that chimes loud and clear. Those are the sort of things Steven Gerrard, Frank Lampard, and Patrick Vieira used to do.

Mohamed Salah prompting 50,000 sharp intakes of breath every time he gets the ball – the magical forward capable of breaking the game open with a sweep of his lethal boot – is just like Thierry Henry, Cristiano Ronaldo, and others before him.

These players aren’t all alike but they tried to do similar things. In footballing terms, what truly sets City and Liverpool apart is the extra dimension given to both sides by their starting full-backs.

“Are they that good or were we that bad?” former Manchester United and England full-back Gary Neville joked during Sky Sports’ coverage, in reference to the bravura qualities of City’s Joao Cancelo and Liverpool’s Trent Alexander-Arnold.

Diogo Jota’s initial equaliser for Liverpool came from Alexander-Arnold’s wonderfully-cushioned pass, while Cancelo floated a delicious ball over the visiting defence for Gabriel Jesus to finish in assured fashion before half-time.

None of this was a particular surprise. Instead of being supplementary attacking threats, as Neville and his generation were from the wide defensive positions, Cancelo and Alexander-Arnold are often the stars of the show.

Who has the most assists in the Premier League this season? 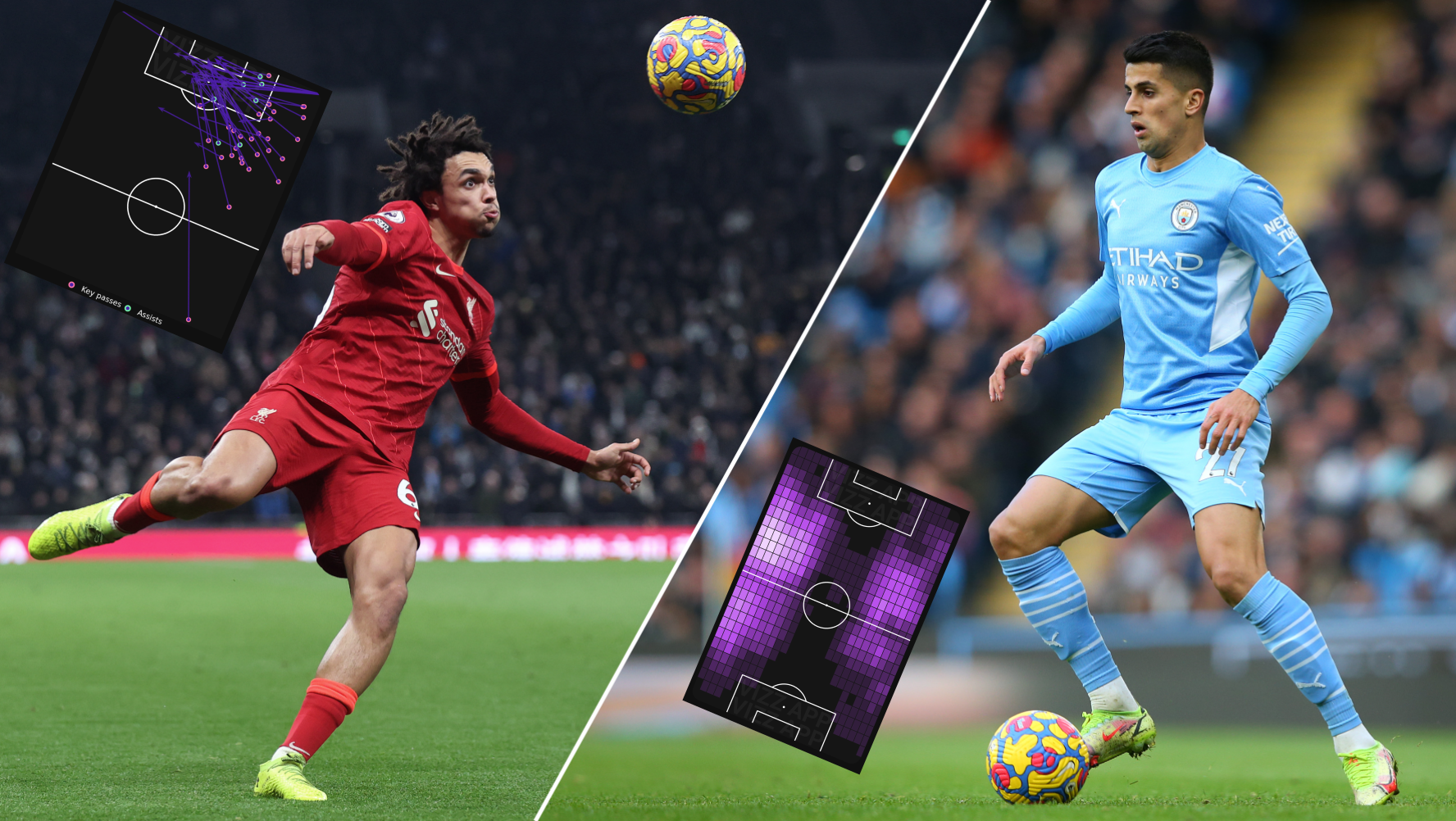 England international Alexander-Arnold leads the way in terms of assists in the Premier League this term, with 12. This is certainly not a particularly over-inflated number. His 9.9 xA (expected assists, based on the quality of chance created) and 0.37 xA per 90 minutes are the best of anyone in England’s top flight, according to FBref.

Only Manchester United’s Bruno Fernandes (80) has made more than Alexander-Arnold’s 77 key passes – passes leading to attempts on goal. City’s assists maestro De Brunye ranks third in this metric with 63.

“Trent – I love the way he passes the ball. I think he’s one of the best passers I’ve ever seen,” Phil Foden told Sky last week when asked which Liverpool player he likes watching the most. Given some of the players with whom Foden shares a training field, not to mention Alexander-Arnold‘s lavishly gifted teammates, it’s high praise.

What truly catches the eye is the range at his disposal – from fizzed flat passes to sumptuous curling efforts, all deployed by a razor-sharp footballing intelligence that means opponents can never truly have all angles covered when Alexander-Arnold is in possession.

In terms of progressive passes – passes that advance a team at least 10 yards towards the opposition goal, made from outside their defensive third – Alexander-Arnold is the best in class with 241. Behind him is Cancelo on 225 before a big shaft of daylight. No other player has completed 170.

“He wanted to play every time and when he didn’t he wasn’t happy – he struggled with how we played, what we wanted to do, and that was the reason why,” Pep Guardiola said when reflecting upon how Cancelo turned around a tough first season at City in 2019/20 to become an integral part of his side and earn a new deal that runs until 2027.

Cancelo’s early career was one of acclaim and potential but unhelpfully flighty in nature. While Alexander-Arnold has been going about his work at Liverpool since childhood, the Portugal international had an impressive but fast-moving CV that featured Benfica, Valencia, Inter Milan, and Juventus by the time he arrived in east Manchester as a 25-year-old.

“Every player has to be treated differently. He’s an incredible person with a big heart but sensitive. I needed time to understand him, now I understand him and he’s important for us,” Guardiola explained.

“Every player has a world and you have to understand it. He’s one of the few we have who would play morning, afternoon, night.”

How has Pep Guardiola changed the full-back position?

This verve for the game has helped Cancelo get his head around Guardiola’s demands, transforming him from a high-octane overlapping, attacking full-back into something a little more cerebral.

The City manager first began experimenting with inverting his full-backs as a way to mitigate the potent counter-attacking threat throughout the Bundesliga when he was in charge of Bayern Munich. The likes of Philipp Lahm, David Alaba, and Joshua Kimmich all tucked in from the wide defensive positions to bolster the base of the midfield.

He developed this strategy with Cancelo last season, with a player comfortable at both right-back and left-back roving into advanced central midfield positions. In 2020/21, he became the first Premier League player to average more than two tackles (2.7), 1.5 chances created (1.7), and 50 successful passes (61.5) per 90 minutes since Cesc Fabregas in 2017-18, according to Opta.

Cancelo was the only defender among the previous 10 players to hit these combined marks, going back to Aaron Ramsey in 2013/14. He was a full-back with the output of an attacking midfielder – something that has continued this season.

No Premier League players have made more than Cancelo’s 81 passes into the penalty area this season, with Fernandes, Leandro Trossard, and Wilfried Zaha in his wake. The other outlier in this top-five with 73 is, of course, Alexander-Arnold.

A source familiar with Guardiola and his coaching team said last year that the City manager’s use of full-backs “since his Bayern days is his greatest tactical contribution to football”. Klopp is certainly among those who has been taking notes.

Are Klopp and Guardiola copying one another?

After City attacked Liverpool in a more direct style than usual last weekend, clipping diagonal balls in behind the Reds’ high line, Klopp praised the superb execution of a plan more readily-associated with his own teams. “I try to imitate the best teams,” a grinning Guardiola said afterward.

During that game, with both players attacking from respective right and left full-back positions, you’d have expected plenty of moments with them coming into direct conflict. 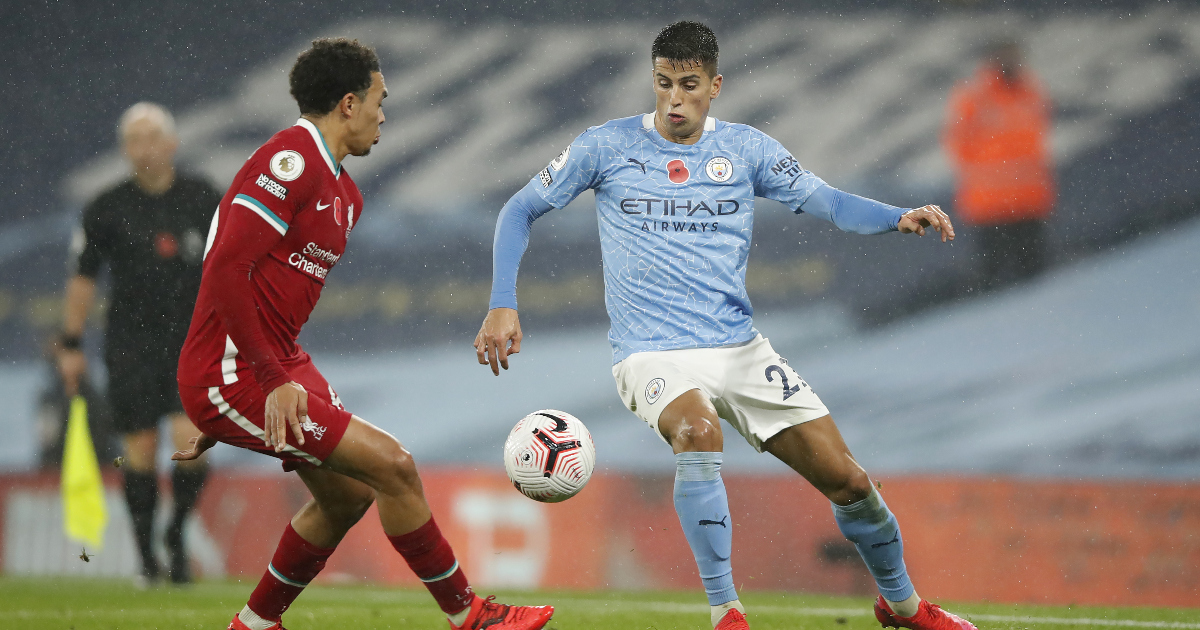 There were elements of that – Alexander-Arnold winning a header above Cancelo in the build-up to Liverpool’s second equaliser, for example – but, as will probably be the case in Saturday’s FA Cup semi-final at Wembley, they were each off on their own trip.

The Liverpool star’s impeccable delivery from the right flank means he remains a conventional wide attacking threat, but nowadays he spends a similar amount of time roving into midfield. And Klopp insists there is plenty more evolution to come.

“I think in the past some people thought about other full-backs that would redefine the position. Maybe they did, and for sure he did as well so far,” he said of Alexander-Arnold before last week’s trip to City. But where it can end, where it will go to, I don’t know.

“We have some ideas how we can evolve our game, but through the season the time we have for training is really tricky [because of] the number of games we play. Maybe we’ll find some moments where we can work on this.”

Cancelo (2,996) is the only player in the Premier League this season to have had more than Alexander-Arnold’s 2,474 touches. The other names on that list are generally central defenders or defensive midfielders.

Along with their supreme creative talents – whether it’s one of Alexander-Arnold’s arching deliveries around an entire defence or Cancelo’s outside-of-the-foot salvos – each player is now key to dictating and controlling matches for their managers.

They provide a point of difference for two era-defining and ever-evolving sides, opening up the kind of options and possibilities that leave trebles and quadruples on the table in mid-April.