Real Madrid will be aiming to strengthen their grip at the top of the La Liga standings when they play hosts to arch-rivals Atletico Madrid this weekend(El Derbi Madrileño).

One of the biggest games of the 2021/22 La Liga season will come our way this Sunday night as leaders Real Madrid takes on neighbours and reigning champions Atletico Madrid at the Santiago Bernabeu.

Real Madrid are sitting comfortably at the top of the table, having collected 39 times from their 16 games so far. The Merengues have a five-point lead over Sevilla in second place following their 2-0 win over Real Sociedad last weekend. That result was followed by another 2-0 victory over Inter Milan in the UEFA Champions League, which meant Los Blancos are on a 12-game unbeaten run in all competitions. Carlo Ancelotti & co. will be aiming to extend that run.

Atletico Madrid, meanwhile, are sitting fourth in the La Liga standings, with their title defence not off to the greatest start. The Rojiblancos are ten points off of their neighbours after losing 2-1 to RCD Mallorca in their last league outing. Diego Simeone’s men bounced back strongly to beat FC Porto 3-1 in midweek to book a place in the Champions League knockout stages and will be hoping to carry that momentum forward.

The corresponding fixture last season ended 2-0 in favour of Real Madrid courtesy of a Casemiro strike and an own goal by Jan Oblak. Ahead of their latest meeting on Sunday night, The Hard Tackle takes a closer look at both teams. 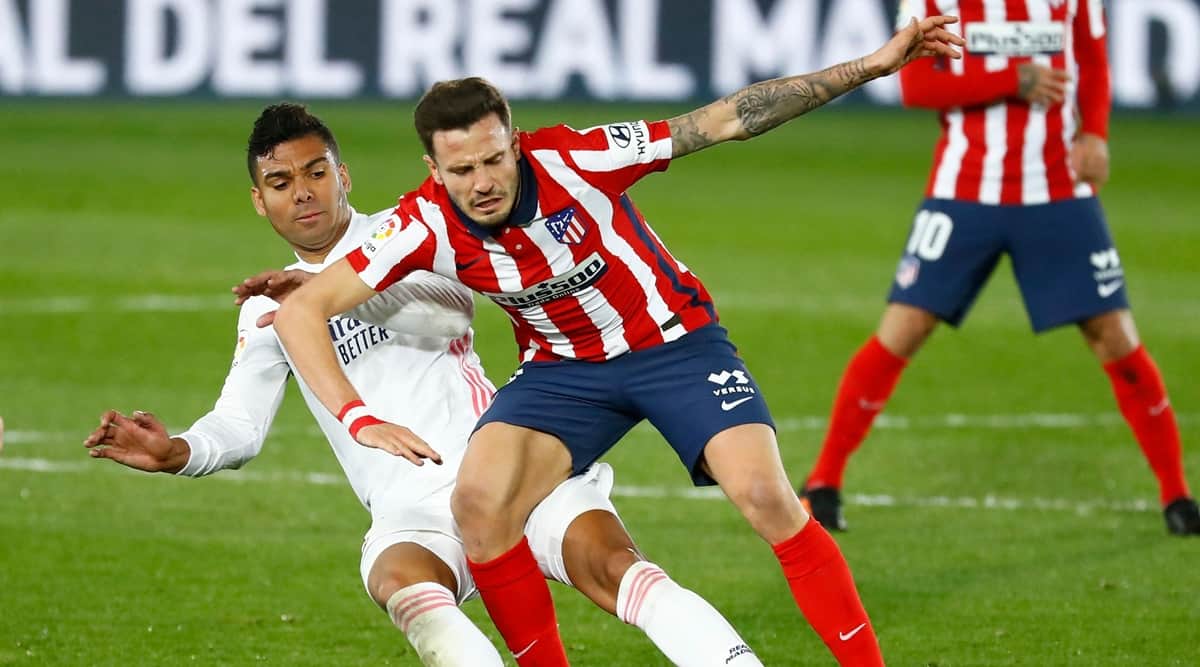 The big news for Real Madrid is that Karim Benzema is back to full fitness and has been named in the squad for the derby after having missed the midweek clash with an injury. Gareth Bale has also returned to the roster, having put his latest injury issue behind him. Dani Ceballos, meanwhile, remains unavailable.

Real Madrid will line up in their usual 4-3-3 formation with Thibaut Courtois manning the goal as expected. There are unlikely to be many changes made to the starting XI that took the field earlier in the week as Eder Militao and David Alaba pair up at the heart of the defence, flanked by the full-back pairing of Dani Carvajal and Ferland Mendy.

Casemiro is a certain starter at the base of the Real Madrid midfield and will be tasked with cutting out the influence of Atletico Madrid’s runners from the centre. He will have Luka Modric and Toni Kroos for the company in the middle of the park, with the pair providing the creativity and control for the home team.

With Benzema back to full fitness, he ought to replace Luka Jovic as the No. 9 for Real Madrid against their local rivals on Sunday. Flanking the Frenchman should be the Brazilian duo of Rodrygo Goes and Vinicius Junior. Marco Asensio misses out despite scoring after coming on as a substitute against Inter Milan while Bale could get some minutes from the bench.

Atletico Madrid have some major injury concerns in defence as both their right-backs, Kieran Trippier and Sime Vrsaljko, are ruled out, along with two centre-backs in Stefan Savic and Jose Maria Gimenez. Luis Suarez had been tipped to be a doubt for the game, but Diego Simeone has insisted that the Uruguayan could be in contention to feature at the Bernabeu.

In the absence of Savic and Gimenez, Felipe is likely to be paired up with a makeshift partner in the form of Geoffrey Kondogbia on Sunday night. Mario Hermoso will take up the left centre-back slot in Atletico Madrid’s 3-1-4-2 setup. Jan Oblak will guard the goal as usual for Los Colchoneros.

Versatile operator Marcos Llorente should slot in as the right wing-back, while Yannick Carrasco should start on the left. While the former will look to pump in crosses, the latter will try to make incisive forward runs. Atletico Madrid captain Koke will sit in front of the defence and look to provide defensive security while spraying forward passes to his teammates when on the ball.

Thomas Lemar and Rodrigo De Paul ought to operate as the two interior midfielders who will be tasked with driving the team forward from the centre of the park and providing attacking support to the strike partnership of Antoine Griezmann and summer signing Matheus Cunha. Angel Correa, Joao Felix and Suarez, if fit, will provide options from the bench.