Alisson has been a colossal presence in recent weeks, bailing Liverpool out with some crucial saves.

Here, the Brazilian was afforded the luxury of being a spectator for much of the game, as the Reds produced a masterclass.

Made an important stop to deny Everton and his distribution was good, though, barring almost being caught in possession once late on.

Alexander-Arnold returned to the starting lineup after injury and reminded us all of his outrageous array of passing.

One inch-perfect pass played a key part in Sadio Mane‘s goal and another soon after should have left to Mohamed Salah making it 3-0.

A joy to watch and defensively solid, too. 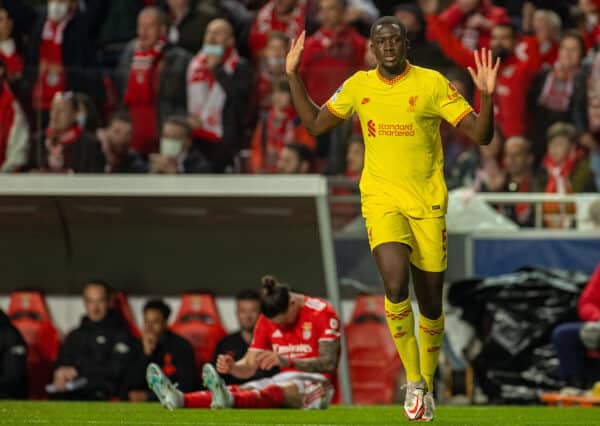 Konate came in for Joel Matip and produced a largely strong performance, often getting the better of the highly rated Darwin Nunez.

The Frenchman showed pace, power and aggression for much of the evening and he headed home the opening goal for good measure, becoming Liverpool’s 20th goalscorer this season.

Made a huge mistake for Nunez’s goal, however, which knocks his rating down to a seven!

Like Alisson, Van Dijk has been near-perfect of late and that continued on Tuesday evening.

Everything about the Dutchman was unruffled, from his poise on the ball to his playing of the high line, and he dovetailed beautifully with Konate.

Back to his very best and the same player as he was pre-injury, even though he had one slight miscommunication with Alisson. 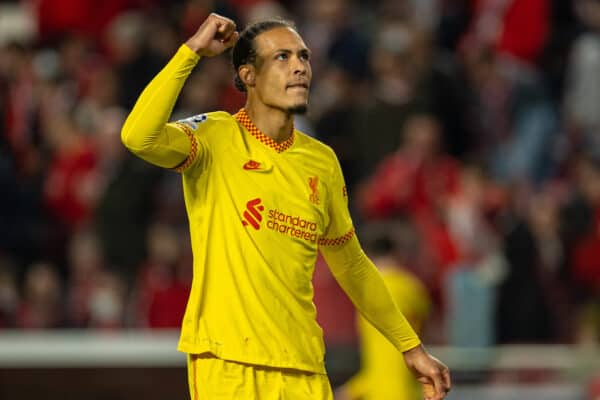 Robertson is very much Liverpool’s Mr Reliable at left-back and he was enjoyed another good night in Portugal.

The Scot whipped in a vicious corner to allow Konate to score the opener and he provided limitless energy down the left flank.

Like so many, not as good in the second half, getting caught out of position a few times.

Fresh off the back of another coolly taken penalty at the weekend, Fabinho was typically dominant in the No. 6 role.

He did so much dirty work that went unnoticed while others produced more creative brilliance, again linking to perfection with Thiago.

Lucky to avoid a first-half booking, though. 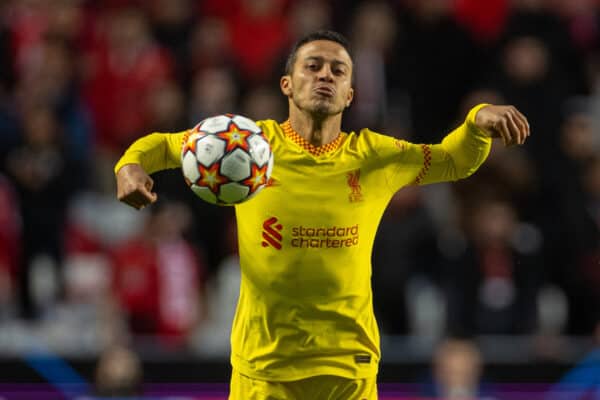 Thiago is enjoying his best spell in a Liverpool shirt and this was another supreme midfield performance for much of the night.

His style, composure and underrated off-ball work all combined to make a display that was so easy on the eye, in particular one effortless first-half dribble and pass.

Wasteful in a short second-half stint, though, and was replaced by Jordan Henderson on the hour mark.

Keita was preferred to Henderson and gave an unmissable audition ahead of the weekend trip to Man City.

The Guinean was a silky presence in the middle of the park, playing one gorgeous through ball to Luis Diaz and keeping things ticking over, assisting the Colombian’s goal late in the day.

On this evidence, he should start Sunday’s crunch Premier League clash. 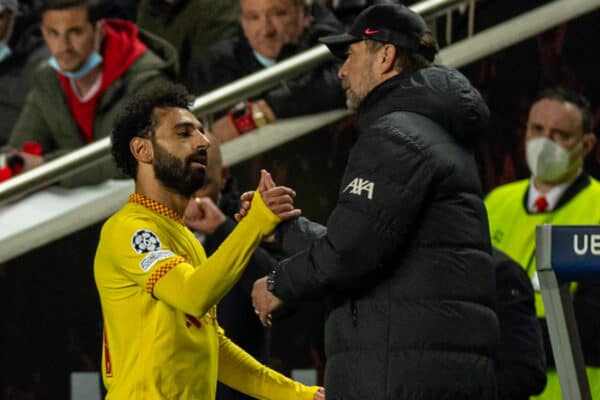 Salah has been well short of his best of late and it still isn’t quite clicking for him like it was.

There were bagfuls of endeavour and plenty of dangerous movement, but he missed one big chance and occasionally ran down blind alleys.

As for his touch, it seems to have completely deserted him, which is a worry, and he is cutting a tired figure. 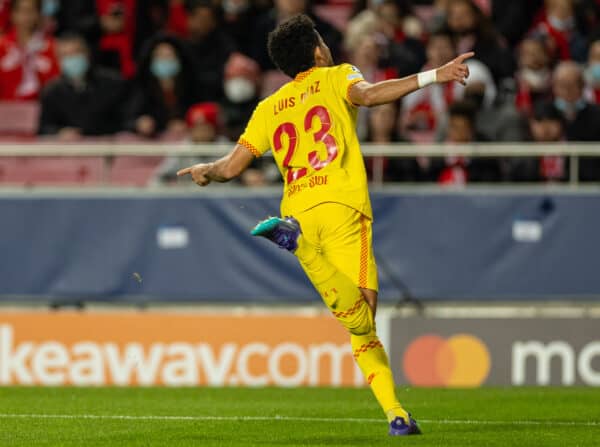 Back in the team against former foes, Diaz was electric out on the left wing, always looking like making something happen.

He was denied by Odysseas Vlachodimos with one dinked effort, but then headed the ball across selflessly for Sadio Mane to tap home and put Liverpool 2-0 up.

Took his goal with aplomb, putting his side in pole position to reach the Champions League semi-finals.

Mane returned to lead the line in his new central role, throwing in a messy performance full of both good and bad.

One superb backheel played in Salah for his chance, but Mane’s holdup play was poor at times and his touch deserted him.