Liverpool beat Chelsea 6-5 on penalties at Wembley to win the FA Cup after drawing 0-0 in 120 minutes and Jurgen Klopp’s side continues their pursuit of a quadruple sweep of trophies. We’ve picked out 11 stats to highlight their achievement in England’s oldest cup competition.

Despite Mohamed Salah leaving the pitch with a suspected injury in the first half, and star winger Sadio Mane missing his effort from the spot, cool finishing and an incredible save from Alisson for Mason Mount’s spot-kick ensured that Liverpool will lift the cup.

Still just three points off the top of the league and with an upcoming Champions League final against Real Madrid, Liverpool look set for a memorable end to the season, and winning the FA Cup may give them an additional boost going into the final few weeks.

This was a repeat of both the Carabao Cup final earlier this season as well as the FA Cup final from 2012. Chelsea won in 2012 but lost on penalties in a similar fashion back in February.

Here are 11 incredible stats from the win to show Liverpool’s brilliance as well as Chelsea’s bad luck.

Liverpool have won both of England’s domestic cup competitions for the first time since 2000-01 when they also went on to win a European trophy that season. Liverpool now have eight FA Cups to their name, a record only bettered by Manchester United with 12 and Arsenal with 14.

This is only the third FA Cup final to go all the way to penalties, with the side who finished higher in the table that season winning both times – Arsenal v Man Utd in 2004-05 and Liverpool v West Ham in 2005-06.

Liverpool’s Jurgen Klopp has become only the second manager to win the European Cup/Champions League, FA Cup, League Cup, and the English top-flight title all with the same English club, after Sir Alex Ferguson with Manchester United.

Chelsea are the first side to lose both domestic cup finals in the same season since Middlesbrough in 1996-97. 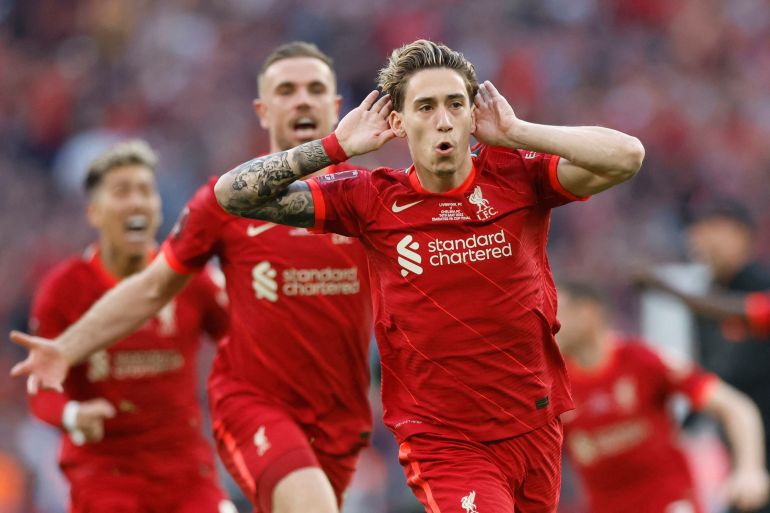 This was Liverpool’s first appearance in the FA Cup final since 2012, and their first victory in the competition since 2005.

Chelsea have now lost the joint-most FA Cup finals in the history of the competition with eight defeats. (Via @Orbinho).